By this time, the library had been serving the county for many years. Library building conditions at all the branches and Main continued to deteriorate. At Main, there was insufficient space to provide the services and materials that were needed by the community.

In 1962, a tax levy was placed on the ballot to raise money for construction of a new main library. The levy failed and the library was forced to explore other possibilities. The County Budget Commission gave the library three annual payments of $63,500 and in 1965, $200,000 in federal aid was granted for the building fund.

Creston moved into new quarters in January 1961 and Rittman followed soon after.

On September 20, 1965 the architectural firm Tuchman and Canute presented the drawings of the new building. Since the new building was to be built on the site of the existing library, temporary quarters had to be found for the collection. the library moved in November 1965 to the Crater Motor building on East North Street where it remained until the new building was completed in March 1967. The formal dedication ceremony was held on October 8, 1967.

Miss Schantz retired in March 1969 and was replaced by Miss Margaret Hauenstein who had begun her library career at Wooster High School and then had moved on to Cleveland Public Library and Cuyahoga County Public Library before returning to her native Wooster.

Family service was started by the bookmobile in September 1972. The bookmobile made stops at thirteen Wayne County communities without branches. These stops were held in the afternoons and evenings to give adults better access to reading materials. The third week of the schedule was designated for town stops while the first two weeks were used to make stops at fourteen county elementary schools. Bookmobile service to the junior and senior high schools had been discontinued because most of the schools during consolidation had developed their own libraries.

After two years of planning, the Shreve library finally moved into its new building in November 1972. A formal dedication was held on January 28, 1973. The need for a new library in Doylestown was first presented in 1972 and in September 1973 plans were approved for a new building. However, it was not until November 20, 1977 that the building was finally dedicated. Various community groups had worked together to raise the needed funds for construction of the building and the Wayne County Public Library paid for the interior furnishings as well as the book collection.

Miss Hauenstein retired in January 1980. Joseph Marconi, who had served as director of the Bayliss Public Library and Hiawathaland Library Cooperative in Michigan, was named director.

Art prints, video cassettes, and toys were added to the ever increasing materials collection. With the growth of the collection and the expansion of services offered, the building had become crowded and renovation was needed. With the help of federal funds, the renovation project became a reality and remodeling began in May 1984. A rededication was held April 15, 1985.

In February 1985, the Wayne County Public Library became a member of CLEVNET - a regional automation system owned and operated by Cleveland Public Library. From September 1985 through November 1986 the library staff entered information about the collection at the Main Library into a central database located in Cleveland. In June 1986, computerized library cards were first issued and finally on September 8, 1986 the main circulation desk went online and began to check books in and out with the automated system. The film department followed on October 6, and on December 18, the online Public Access Catalogs (PACs) were installed.

The library had been receiving its funding since the 1930's from the intangibles tax, a county tax levied on stocks and bonds owned by the county residents. The intangibles tax was abolished in 1986 and libraries across the state began receiving an amount equal to 6.3% of the state's income tax revenue.

A new branch in Dalton was approved in June 1988 with construction of the building beginning in October. The building opened in May 1989 and the dedication was held August 27, 1989.

Approval for the new Creston branch building was given in 1990 and groundbreaking ceremonies were held on October 24, 1990. Many obstacles, including ground pollution and lack of funding, had to be overcome before the building was finally dedicated on October 13, 1991.

On Christmas Eve, 1991 at 10:45 a.m., the Wayne County Public Library circulated its 1 millionth item for the first time in one year.

With the percentage received from the state income tax cut back and the demand for materials and services increasing, the library board decided in November 1993 to place a five year one mill operating levy on the ballot. The levy passed 12,683 to 10,385.

Joseph Marconi retired in January 1995. Theodore Allison, Director of the Bellevue Public Library was chosen as his replacement. Following the precedent set in 1901, the board asked for Allison's resignation in November 1995. Despite protests from the staff and the public, the board refused to reinstate Mr. Allison. Alice Finley, Assistant Director, was appointed Acting Director until a replacement could be found. In August 1996, Pamela Hickson-Stevenson, director of the Wadsworth Public Library, was named director.

On February 14, 1997, the 300 year old northern red oak that had shaded both library buildings (Wooster) and countless readers throughout the years had to be cut down.

On June 29, 2001, Pamela Hickson-Stevenson resigned from the Wayne County Public Library to accept a position with the Portage County District Library. Greg Lubelski, Executive Director of the Erie County (PA) Public Library began as the new library director May 2002. He remained until his retirement in 2010. Jimmy Epling was director for a short time in 2010. With Epling's resignation, Jennifer Shatzer became Interim director in October 2010 and was named the new director a few months later by the Board. 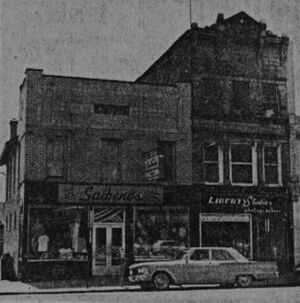 Historical record shows the existence of a library on the second story of the Saiebens store building (pictured left).

The early history about the first library in Wooster isn't well recorded. The exact date of the founding of the first Wooster library is unknown. Prior to 1857, some type of library association was in existence although the records do not provide information on its location or members. A group of Wooster residents first discussed the formation of a Wooster library at a school house meeting in 1857.

Wooster citizens met at the school house of Subdistrict One on March 7, 1857 and formally organized the Wooster Library Association. They chose a board of directors; four individuals who were already serving as directors of the old organization. The association housed its collection of history and reference books in the law offices of M. Bonewitz on Liberty Street.

In the late 1890s, records also show a library on the second floor of a clothing store—Saibenes "Clothes for Kiddies"—on East Liberty and Buckeye.

Planning for the Wooster Free Library began in 1897. In 1900, the Board of Education levied a tax and raised $500 to start a reading room. 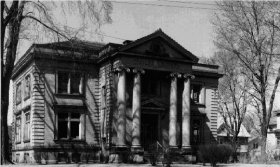 When Andrew Carnegie gave the College of Wooster money to rebuild buildings destroyed in a fire, the Library committee asked for financial help to build a new library. After some negotiation, Carnegie agreed to contribute $15,000.

A site was purchased at the corner of Market and Larwill Streets, and construction began. The building was designed by architect Vernon Redding and built by John King. The building was completed in 1905 for a total cost of $22,300. It was never officially named a Carnegie library despite Carnegie's funding.

To access funds from the intangible taxes, the Library was put under the authority of the City School Board.

By 1911, the Library collection had grown to over 6,300 books and a card catalog was in place. A museum on the second floor of the Library officially opened in 1918. It housed many relics and archeological specimens from Wayne County. It remained opened until 1958 when it was moved to the Wayne County Historical Society.

During World War I, the Library collaborated with the College of Wooster Library to send books to the soldiers in camps in North Carolina, Virginia, and New Jersey.

Not so fun fact: In 1918 the Spanish Influenza spread across Europe and came to the United States with returning WWI soldiers. Due to illness, that October the Library was only open 7 days, 19 days in November, and was closed all of December and January. 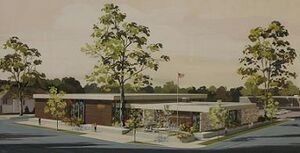 By the 1960s, Wooster's population had increased from 5,000 to 7,000 and the Library no longer had the room to operate. The weight of books had the floors buckling and the bookmobile was loaded from a basement window.

The new Library was to be built on the site of the old Carnegie Library. The Carnegie Library was torn down in 1966 to begin construction of the new Library on the same lot. The Library collection was temporarily relocated to the Crater Motor Building and remained there until March of 1967. Freeman Construction was selected as general contractor and the building was designed by the Akron architectural firm, Tuchman and Canute. This Library operated until 2007. 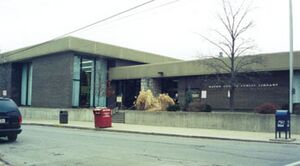 The Larwill building was partially renovated in the first half of 2008 to serve as the new Operations Center, previously located in the basement of the Wayne Metro Housing building on Market St. The new renovation also features a larger garage and working areas for the Bookmobile Department, eliminating the need for rented garage and storage space. This new center also houses the Finance, IT, Human Resources, Publicity, Maintenance and the Technical Services (TS) Department. The TS Department handles the purchasing, cataloging, and inventory of all materials in the WCPL system. 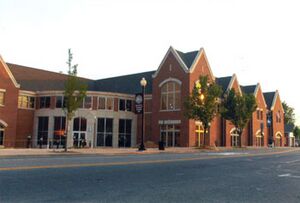 Fun Fact: On Christmas Eve 1991 at 10:45am, the WCPL circulated its 1 millionth item for the first time in one year. The Dalton Branch checked out the milestone item. To celebrate, the patron checking out the 1-millionth item received a $100 savings bond. 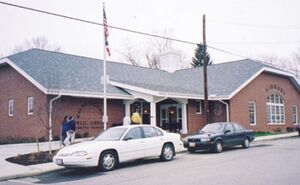 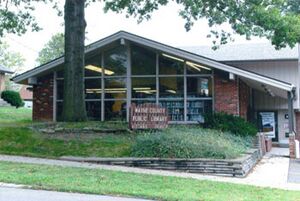 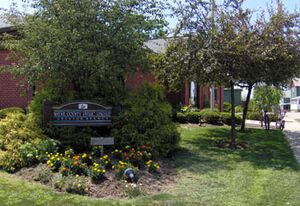 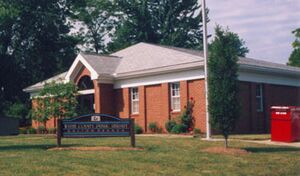 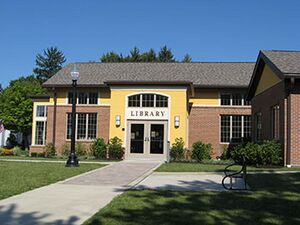 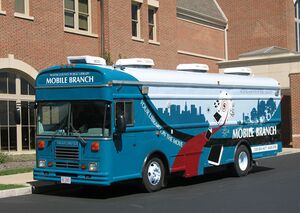 There are many scrapbooks on the Wayne County Public Library. These scrapbooks are kept in genealogy staff workroom in the glass cabinets. Other papers regarding the library are located in the same place and are not organized. Other items regarding library history include the following:

Board of Trustees WCPL Library