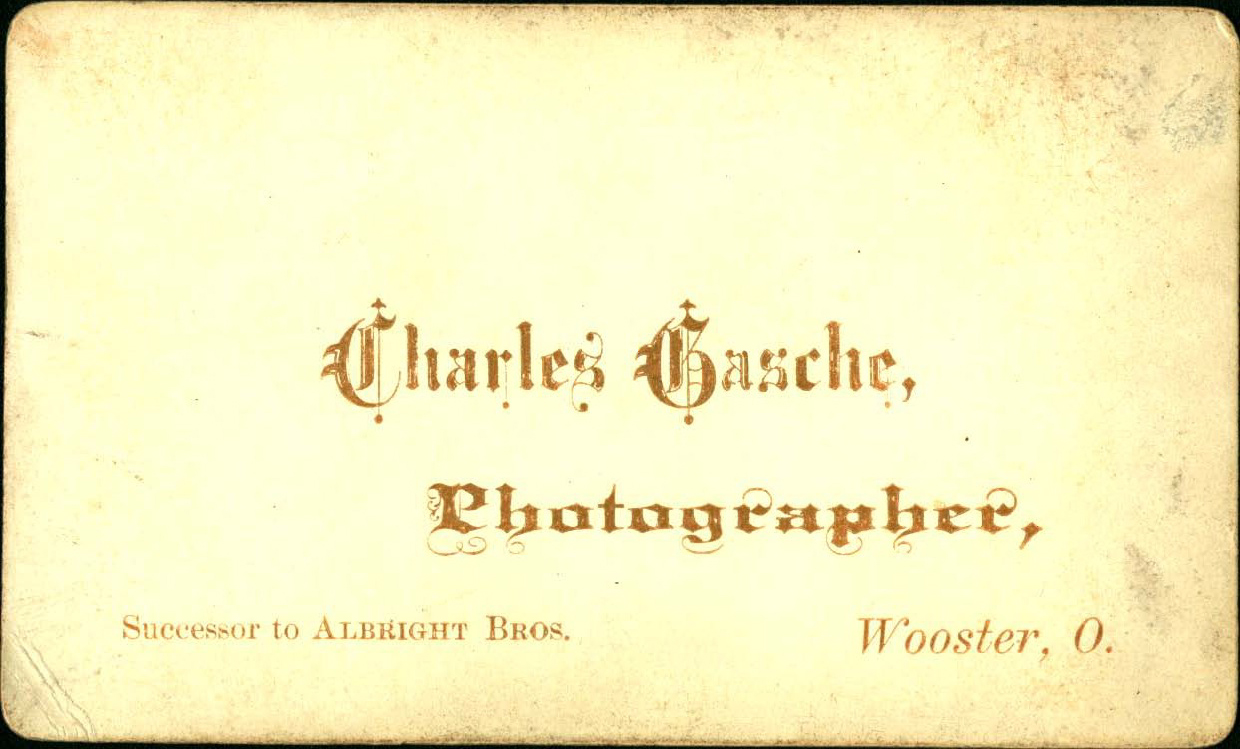 Charles Gasche worked as a view artist, fresco and portrait painter, and photographer. He was born in Wooster, Ohio on 16 Nov 1846, a son of Gotlieb and Christena Gasche. Gotlieb Gasche was a brother of Charles Gasche Sr. By 1870 Charles Gasche he working as a fresco artist. From 1873 to 1875 he was employed by the Philadelphia publishing firm of Joseph A. Caldwell to provide farmscapes and sketches of local landmarks for the county atlases of Wayne, published in 1873, Ashland County in 1874, and Holmes County in 1875. In August of 1875, Gasche purchased the Albright Brothers photography gallery and briefly worked as a photographer. In 1876 and 1877 he executed an elaborate scheme of pictorial decoration for the new thousand-seat Quinby Opera House in Wooster. In the spring of 1882 he traveled to Washington D.C. and other eastern cities to draw sketches for water sports adventurer, Paul Boyton to use in advertisements. He also painted a number of portraits of local Judges, and well-known citizens. Among those portraits is one of John Larwill in the collection of the Wayne County Historical Society. In the courthouse Gasche painted the portraits of Judge Avery, Hon. Joseph H. Downing, Judge Ezra Dean, Judges Sample, Reed, and Stillwell. Gasche was still working on a series of judicial portraits in 1885. [1]

There were three Charles Gasche families residing in Wooster, Ohio in the 1880 US Census.

Charles Gasche, age 38 and born in Ohio was listed as a stair builder. In the 1884 Wooster City Directory, he is listed as C. C. Gasche and is residing at 107 W. North St. He is married to Frances and four children are listed: Ferdinand, Edith, Arthur and Mary. The census shows his parents were from Prussia. He was born 3 Aug 1840 and died 22 Jun 1938. He is buried in the Wooster Cemetery, Section 10, Lot 323.

Charles Gasche, age 33 and born in Ohio was listed as an artist. He is the subject of this Wiki page. He was married to Mary Young and had two sons: Paul G. and Edmond. His parents were Gotlieb and Christena (Nold) Gasche. This Charles Gasche does not appear to be listed in the 1884 Wooster City Directory. He was born 16 Nov 1847 and died 3 Jul 1886. He is buried in the Wooster Cemetery, Section 9, Lot 234.

On last Saturday morning Charles Gasche, the well-known portrait painter of this city, died at his home on North Buckeye street after a long illness. Deceased had been afflicted for some time past with consumption of the lungs, which latterly induced other chronic ailments. He had been up and down for the past two years, his last illness being for about two months. Deceased was born Nov 16, 1846 and hence was 39 years 7 months and 17 days old. The father and two brothers have preceded him to the grave. His mother still survives. On the 12th of October 1869, he was married to Mary Young, daughter of the late Louis Young. This marriage was blessed with two sons, Paul, the eldest, dying April 1st 1882. The wife and surviving son, with the aged mother, remain to mourn the loss of a kind and loving relative. The funeral took place on Monday afternoon from his late residence and was largely attended. Mr. Gasche was a painter of more than ordinary note and was a able instructor in this fine art. Just a short time prior to his death he completed a course of instruction to a large class of pupils and it is thought that the extra exertion required of him to complete this course hastened his death.

Charles Gasche, the well-known artist, departed this life last Saturday morning, July 3d, at his home on North Buckeye Street. For a considerable period he had been an invalid from consumption of the lungs, which finally caused his death at the age of 39 years, 7 months, and 17 days.

He was the oldest and only surviving of three sons of the late Captain Gasche, his bereaved mother being now the only living member of the family. On Oct. 12th 1869, he was married to Miss Mary Young, oldest daughter of the late Louis Young Sr., which union was favored with two sons, the eldest, Paul, dying in April 1882.

The deceased was an artist of much natural ability and of finely cultivated skill. Much of his excellent work lives here at home and specimens at many places abroad will keep his name and ability in memory. The elaborate oil fresco painting in the Court Room, with its portraits of the Judges, are evidences of his skill, as is also much of the painted ornamentation of Quimby Opera House. In many residences are samples of his skill, by way of beautiful decorations; also portraits, pieces of natural scenery and animals, fruits and flowers, gems of fancy sketches etc. He gave instruction in the art and was a popular teacher.

Socially, he was clever, liberal and companionable, well informed on all topics, a fine conversationalist, and popular with acquaintances. Many much regret his death in the prime of life. The bereaved with and mother have the sympathy of all.