It is unnecessary to include braces, quotation marks or other wiki-markup in the template. The |text= field does allow the use of wiki-markup at the contributor's discretion. 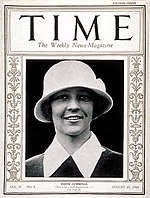 Time (trademarked in capitals as TIME) is an American news magazine, similar to Newsweek and U.S. News & World Report. A European edition (Time Europe, formerly known as Time Atlantic) is published from London. Time Europe covers the Middle East, Africa and, since 2003, Latin America. An Asian edition (Time Asia) is based in Hong Kong. As of 2009, Time no longer publishes a Canadian advertiser edition. The South Pacific edition, covering Australia, New Zealand and the Pacific Islands, is based in Sydney. In some advertising campaigns, the magazine has suggested that, through a bacronym, the letters T-I-M-E stand for The International Magazine of Events.

Batman (originally referred to as the Bat-Man and still referred to at times as the Batman) is a fictional character, a comic booksuperhero co-created by artist Bob Kane and writer Bill Finger (although only Kane receives official credit), appearing in publications by DC Comics. The character first appeared in Detective Comics #27 in May 1939. Batman's secret identity is Bruce Wayne, a wealthy industrialist, playboy, and philanthropist. Witnessing the murder of his parents as a child, Wayne trains himself both physically and intellectually and dons a bat-themed costume in order to fight crime. Batman operates in the fictional American Gotham City, assisted by various supporting characters including his sidekick Robin and his butler Alfred Pennyworth, and fights an assortment of villains influenced by the characters' roots in film and pulp magazines. Unlike most superheroes, he does not possess any superpowers; he makes use of intellect, detective skills, science and technology, wealth, physical prowess, and intimidation in his war on crime.

This box:
Retrieved from "https://wiki.wcpl.info/w/index.php?title=Template:Selected_publication&oldid=14472"
Categories: