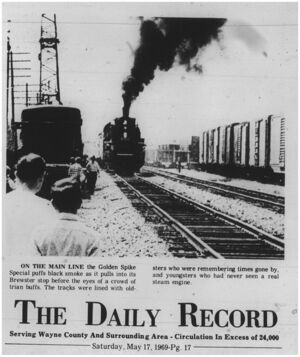 Nickel Plate 759 steams through Brewster, Ohio in May of 1969. She was pulling the Golden Spike Special, celebrating the 100th anniversary of completion of the United States Transcontinental Railroad. ad, [1]

NOTE: Due to company mergers, buyouts, name changes, and ownership versus whom the railroad was leased to, the naming of railroads and their routes within this timeline may be difficult to follow. For this reason, a visual timeline showing the separate lines and the current operator name is included. However, it is not a complete timeline, especially for the history of the Ft. Wayne Line, which has been greatly simplified. The phrase "the former ____ line" borrows the company name of the dominant owner during the 20th century or whichever name happened to stick (usually the first majorly successful owner).

Timeline of Railroads in Wayne County

Most of the railroads built through Wayne County were in place before 1900. In terms of mileage, about half of the rails built are currently in service. On a local level, railroads in Wayne County connected major towns through smaller communities. Wooster, Orrville, and Creston formed hubs for larger routes. Wayne County sits between Cleveland and Columbus/Akron; additionally, one of the early East-West main lines passed through. These two reasons turned Wayne County into a sort of “commuter lane” for trains between large Midwest cities.

The first railroad in Wayne County was built by the Ohio & Pennsylvania in 1852, heading west out of Massillon (in neighboring Stark County) into Wooster. Around 1854, the Cleveland, Zanesville and Cincinnati Railroad Company connected Fredericksburg, Apple Creek, East Union, Orrville, and Marshallville. In 1863, the Atlantic & Great Western skirted the northern county line, building through Burbank, Creston, Sterling, and Rittman. Ten years later, the Cleveland, Tuscarawas Valley & Wheeling Railroad connected Sterling, Easton, and Warwick. Then in 1882, the Wheeling & Lake Erie built through Creston, Smithville, Orrville, and Dalton.

In 1894, the Millersburg, Jeromesville, and Greenwich connected Sprengs, Funk, Horace, Craigton, and Custaloga. Before 1898, it was renamed the Ashland and Wooster Railway Company or A&W. One year later, the Cleveland, Wooster and Muskingum Valley Railroad, part of the B&O connected Lodi, Wooster, and Millersburg, now known as the Millersburg Branch. Then in 1902 A&W then built the “Apple Creek Branch” line connecting Apple Creek, Kidron, and West Lebanon. Soon after, the A&W gave the Apple Creek Branch to the Cleveland, Akron, & Columbus Railway (CA&C).

After 1920, when the use of automobiles began to surge, railroads began to abandon their lines of lesser importance. In 1926, the Apple Creek Branch and the A&W (which was sold in 1914 to become the Lorain, Ashland, and Southern Railway, LA&S) were abandoned.

On July 4, 1969, a record breaking storm known as the “Ohio Fireworks Derecho” blew through Wayne County. The storm claimed 42 lives and devastated communities all throughout Northeast Ohio. Rising floodwaters washed out most of the former CA&C Fredericksburg-Orrville line and severely damaged the B&O's Millersburg branch. The CA&C had been merged into the Penn Central two years earlier, which already favored the former New York Central Columbus-Cleveland route. For this reason, the Fredericksburg-Orrville route was abandoned. On August 8, 1977, a Conrail freight train derailed in downtown Wooster and severely damaged the former Pennsy depot. Despite it being a historical site, Conrail elected to demolish the depot due to diminishing usage and high repair costs. Later in 1986, the Orrville-Clinton branch was mostly abandoned. Likely around the same time, the former Erie Lodi-West Salem line was abandoned.

In 1903, the Cleveland, Southwestern & Columbus Railway built through Creston and Madisonburg to Wooster. Unlike the other railroads through Wayne County, the Southwestern System was interurban service, meaning its primary purpose was to connect a major city (Cleveland) to the surrounding suburbs and rural communities with electric trolleys. The success of interurban systems was due to the poor condition of roads and initial rarity of cars. By 1925, however, with road quality improving and the price of cars falling, interurbans were becoming more of a nuisance than a viable industry. The Southwestern System was abandoned in 1931.

Today, the original Ohio & Pennsylvania and Cleveland, Tuscarawas Valley & Wheeling Railroad lines are in regular service as part of Norfolk Southern’s Ft. Wayne Line and CSX Transportation’s New Castle subdivisions, respectively. Additionally, CSX Transportation also operates the former B&O line heading north out of Sterling as part of the CL&W subdivision. The Wheeling & Lake Erie line is operated by another company of the same name. A small section of the Millersburg branch still exists in downtown Wooster and is operated by RJ Colman Railroad Group. A small section of the CA&C line still exists in downtown Orrville and serves various local industries. The Ashland Railway operates a small stretch of track within Wayne County, heading west out of West Salem.

Some of Wayne County’s older railroad history can still be found. The original B&O Wooster depot along the Millersburg branch is currently Dick Stull’s Barber Shop. The Pennsy’s distinctive position-light signals, a somewhat rare sight today, can also be seen in Wooster. They are easily viewed from the Palmer Street Bridge just north of Leroy’s Place. Finally, the 1921 Minglewood Ice Plant in Wooster is currently the Minglewood Distilling Company. The old right of ways (ROW) - the land railroads own and build tracks on - for the more recent abandonments are recognizable and can be located on Google Maps using satellite mode. However, the ROWs run through private property and are therefore not legally accessible. The former Pennsy depot in downtown Wooster was located at the parking lot across the street from OneEighty, at the intersection of Liberty St. and Spink St.

Wayne County has had a number of accidents over the years. This is not an exhaustive list, but more of a sampling from within the newspaper catalog.

Our department does not have any railroad employee records. However, we do have general information on various railroads that went through Wayne County, OH. Knowing the history of the railroads is a start to trying to locate any records that may still exist. William Snyder, author of The Rattlesnake and the Ramsey, provided a list of 13 different resources that may prove beneficial. These include the following: