This document is a letter sent to an undetermined group of "comrades" as an invitation to a presentation of the old colors at the State House in Columbus, Ohio. The document is dated December 16th, 1925. It constitutes the sixteenth page of the Frank Gerlach file. 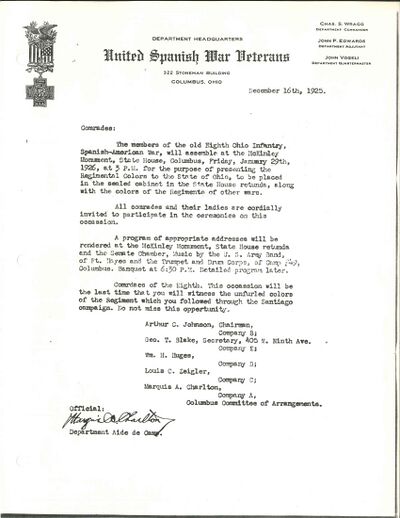 Comrades: The members of the old Eighth Ohio Infantry, Spanish-American War, will assemble at the McKinley Monument, State House, Columbus, Friday, January 29th, 1926, at 3 P.M. for the purpose of presenting the Regimental Colors to the State of Ohio, to be placed in the sealed cabinet in the State House retunda [sic], along with the colors of the Regiments of other wars.

All comrades and their ladies are cordially invited to participate in the ceremonies on this occasion.

A program of appropriate addresses will be rendered at the McKinley Monument, State House retunda [sic] and the Senate Chamber, Music by the U. S. Army Band, of Ft. Hayes and the Trumpet and Drum Corps, of Camp #49, Columbus. Banquet at 6:30 P.M. Detailed program later.

Comrades of the Eighth. This occasion will be the last time that you will witness the unfurled colors of the Regiment which you followed through the Santiago campaign. Do not miss this opportunity.