This document contains a segmented newspaper clipping commemorating the 44th anniversary of the departure of Company D of the Eighth Ohio Volunteer Infantry. The article is the eleventh page in the Frank Gerlach file. 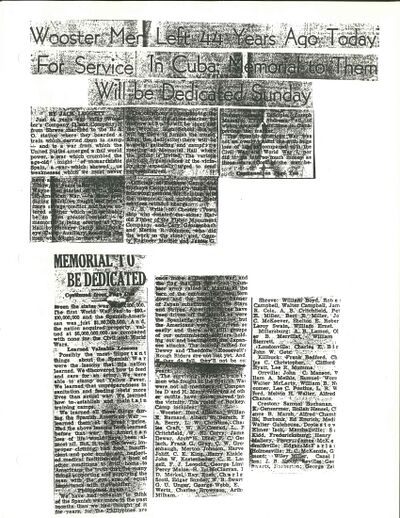 For Service In Cuba; Memorial to Them

Will be Dedicated Sunday

Just 44 years ago today Wooster’s Company D and Company H from Shreve marched to the B. & O. station where they boarded a train which carried them to camp — and to a war from which the United States emerged a full world power, a war which crumbled the age-old might of monarchistic Spain, a war which we must never have again [____].

Now, 44 years after, the [_____] Wayne men started off to the Spanish-American War, — a time span durning which we fought and won a more savage conflict and have entered another which will probably be an even greater contest — a memorial is being erected at City Hall by Buckeye Camp and Buckeye Camp Auxiliary honoring the men who fought in that war.

The ceremony accompanying the dedication of the stone marker tomorrow at 3 p.m. will be short and the Wooster High School Band will be there to furnish the music. After the dedication there will be a social gathering and campfire meeting at Memorial Hall where the public is invited. The various patriotic organizations of the vicinity are especially urged to send representatives.

Officials of Buckeye Camp and Buckeye Camp Auxiliary thank the following persons for helping with the memorial and providing their services without charge:

J.B. Wylie of Chester Township who donated the stone; Harold Fisher of the Fisher Monument Company and Cary Grossenbach and Merton R. Johnson, who did the work on the stone; and County Engineer Mether and James G. Shamp, Joseph DiScipio, Joseph Massaro, L.A. Andrews, all of whom donated their time in transporting the matter.

The Spanish-American War was not an overly violent one with huge loss of life as compared with the Civil War and World War I, nor did it _un into so much money as those wars. Cost of the war be- Continued on Page Ten

MEMORIAL TO BE DEDICATED

Continued from Page One

Possibly the most important things about the Spanish War were the lessons that this nation learned. We discovered how to feed and care for an army. We were able to stamp out Yellow Fever. We learned that unpreparedness in sanitation and feeding costs more lives than actual war. We learned how to establish and maintain training camps.

We learned all those things during the Spanish-American War — Learned them at a great price. Had the above lessons been learned before that war, the American loss of life would have been almost nil. But, it took the fever, improper clothing, bad food, insufficient and poor equipment, neglect-ed medical facilities and a host of other conditions to drill home to Americans the truth that the many things supporting and supplying the man with the gun are of equal importance with that soldier.

We have had occasion to think of the Spanish war more in the past months than we had thought of it for years, for the Philippines are once more a theater of war and the flag that the American volunteer army raised at Manila at the turn of the century has been torn down and the Rising Sun banner of Japan substituted for the Stars and Stripes. American forces have been driven off the land as were the Spaniards years back — but the Americans were not driven so easily and there are still groups of our outnumbered soldiers holding out and beating off the Japanese attacks. The island famed for Dewy and Theodore Roosevelt’s Rough Riders are not lost yet. And if they do fall, they’ll not be ou[_] of American [______] years.

The surviving Wayne County men who fought in the Spanish War were not all members of Companies D and H. Many veterans of other outfits have since moved into the vicinity. The roster of Buckeye Camp includes: