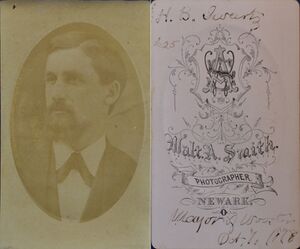 The gentleman, whose name stands at the head of this sketch, was born in Milton Township, Wayne County, Ohio, May 27th, 1846. He is the fourth in the list of twelve children—six sons and six daughters, of Samuel and Mary Swartz, whose pioneer farmer home was for many years a model of thrift, loveliness, and family adornment. His mother, still living, well deserves to rank among that ideal class whose price is far above rubies. His father also was a man who met Solomon's distinctive tribute, as one who was for many years "known in the gates" and "sitting among the elders of the land."

Amid such environments he grew to manhood. During his earlier years his employments were such as are common to farmers' boys in pioneer days. He attended the district school in winter,—made progress in study and books, and laid a few foundation stones upon which some parts of his life's structure yet rest. To these early years, under the tutelage of father's and mother, whose chief ambitions were to impress upon the minds of their children such principles as would make possible lives of usefulness and honor, Judge Swartz, like myriads of others, is deeply indebted for that probity of character, and those justifiable aspirations that prominently characterize him as a citizen in all the passages of life. In these immature years, when the mind is taking its bent, when youthful ambitions are shaping themselves for manhood achievements, no influences have ever been found more prolific or potential for good, than those which the farm with such accompaniments, has afforded. The farmer's home,—the chaste purity of its teachings,—the broad fields,—the forest—the orchard—and the meadow—hill and dale,— the song of birds, and the hum of bees—the laughing brook—the silent river—all the opulence of beaut3' that nature spreads out with lavish hand, are teachers of youth whose lessons are never forgotten.

It was amid such scenes, and influences that the early j'ears of Judge Swartz were spent. And he is still a lover of nature and a student of her secrets. At the age of sixteen, having quit the common school, he entered the Academy at Seville, O., for the winter term, returning again the succeeding school season. In the winter of 1864-5 he was the teacher in the old home school, having as scholars the companions of his childhood, and for his patrons the citizens of his own neighborhood; among whom he was, and has ever since been regarded with highest esteem.

In the autumn of 1865 he went to Granville, 0., entering upon the preparatory course at Denison University, and remaining there, during the school year, until he had completed the Freshman year of the regular classical course. His health then suffering impairment, and his condition demanding change and rest, he, for a time, relinquished study. His health regained—in the fall of 1868, he entered the Law Department of the University of Michigan, at Ann Arbor. In this department he pursued his labors one school year, when he determined to complete his original purpose in the classics. Thus, partially abandoning his legal studies, in January 1869 he entered the Literary Department of that University.

By his zeal, ambition, and indefatigable energy and industry, he successfully carried the work of both departments within the period of four years, and so efficiently had he accomplished it in each, that he graduated from both, in the class of 1872, by special permission of the Faculty, who, in consideration of the proficiency of his work, and his standards in both lines of study, found no reason for withholding their consent, although without a precedent in the history of the University at that time.

In the fall of 1872, he began the practice of his profession at Newark, 0. in partnership with his brother, John M., then, also a beginner at the bar, but who afterwards was elected Prosecuting Attorney of Licking County, and later as Circuit Judge of the 5th Judicial Circuit. In the fall of 1875, he removed from Newark to Wooster, having his office with Hon. J. K. McBride, and subsequently with Hon. T. Y. McCray.

In the spring of 1877, he was elected Mayor of Wooster, and re-elected in 1879, serving four years with great popularity and acceptance. During this period he codified the Ordinances of the City, was largely instrumental in establishing the 5th Ward, so as to secure better school facilities in that part of the City, secured the regulation of coaches for passengers at the depot, and began the work of cleaning up the public square, and terminating the hitching and feeding of teams thereon, thereby greatly enhancing the comfort and beauty of the city. During his official term the water works of the city were established, and the complete sewerage of the city was commenced. He also succeeded in breaking up the tramp nuisance by the vigorous use of the "ball and chain," and established the city prison system on a better basis than formerly. His administration of the mayoralty marks the successful beginning of the public improvements for which the oity is now noted. The vigor of his administration was felt and appreciated by the citizens throughout the city and country, as evidenced by the unusually large amount of business done in the office.

From 1881, when his last term as Mayor closed, until 1888, he continued exclusively in the practice of law, when having won honorable distinction at the bar, he was elected Probate Judge of Wayne County, and re-elected in the fall of 1891, serving two terms with great favor and distinction. At the close of his career as Probate Judge, he again opened an office, and entered upon, and is still pursuing the work of an active practitioner at the Wooster bar.

Judge Swartz is thoroughly in love with the legal profession, for which he has peculiar and natural aptitudes; he has a judicial cast of mind and while the incnmbent of the Probate office, was a sound, independent and impartial judge. As a public speaker and advocate at the bar, he is entertaining, thoughtful, animated and persuasive, never resorting to specious methods, but ever giving a courteous dignity and directness to his utterances, and in the discharge of the varied public duties committed to him through his many years of service, he was always devoted and zealous, careful, constant and eminently trustworthy.

In political, educational, and religious matters, he has, and invariably does, take a deep interest, being frequently called upon to address public assemblies in furtherance of one and another of these subjects.

He throws energy, vigor, earnestness, moral conviction and a christian conscience into all his work. His early struggles with situations have vitalized the courage, resolution, genius and pluck which nature im parted to him. He is known as a man of intense convictions, and unyielding hostility to every form of vice. He advocates and strictly adheres to the motto—"No bad language. No bad habits. No bad company."

He is progressive, has up to date opinions on all leading subjects, while holding tenaciously to the highest standard of truth, and is ever ready and willing to exert his influence and aid in all movements in the interest of better conditions, good government and the promotion of the city and the best means of advancing its prosperity, and the interest of the public at large.

Socially he is genial, and of a friendly temper, sympathetic, charitable, warm in his impulses, accessible and polite to all, without regard to any outward conditions or circumstances, but holds himself aloof from such as he deems unworthy of honorable recognition by reason of either treachery, hypocrisy, or evil doing of any kind. He is deservedly popular in the highest sense, having hosts of friends who regard him as a gentleman of integrity, ability and incorruptible character.

In his home he is surrounded by a family noted for its intelligence and uprightness. His sons are graduates of Wooster's educational institutions and his daughters, young ladies of ability and refinement, the oldest being now a teacher in Wooster High School; and his wife, formerly Miss Davies of Granville, O., is "a woman of rare culture, devotedly attached to her home and for many years actively engaged in deeds of charity and usefulness, and is associated with a large circle of admiring friends.[1]