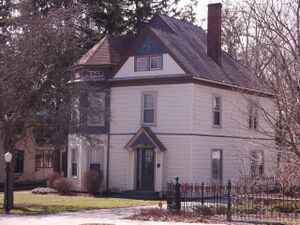 The house located at 348 N. Bever St. was likely built sometime after 1894 when local attorney Hiram B. Swartz purchased the property. Photograph by S. Zimmerman 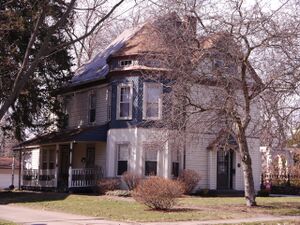 The house located at 348 N. Bever St. was likely built sometime after 1894 when local attorney Hiram B. Swartz and his wife, Martha, purchased the property. The Swartz's lived in the house for at least 45 years until the death of Hiram B. Swartz. He died in the house at the age of 92 on March 6, 1939 at 7:40AM from bronchial pneumonia. His wife Martha died a year later on June 4, 1940.

Hiram B. Swartz was born in Milton Township, May 27, 1846, the fourth of twelve children from parents Samuel and Mary Swartz, pioneer farmers. After attending the rural schools of Milton Township, he attended Seville Academy and for a year was a school teacher. In 1865 he began a preparatory course at Denison University in Granville, Ohio. Then in 1886 he entered the law department at the University of Michigan and graduated in 1872, and married Martha Jane Davies on October 8, 1872. The couple moved to Newark, Ohio where he began practicing law and started a family. A daughter, Mary (Swartz) Rose became a nationally known nutrition expert of Columbia University in New York City. She was the first of five children of Hiram Schwartz and Martha Jane Davies.

In 1875 he and his family moved to Wooster, Ohio and he became a long standing member of the Wayne County law professionals; practicing 67 years. Hiram Swartz was elected Mayor of Wooster in 1877, serving four years, during which time his administration cleaned up the public square and terminated the practice of feeding horses on the square. Furthermore, during his term in office the first waterworks plant was installed and the first city ordinances were codified. During the 1890s Swartz served as a Wayne County probate judge for two terms.