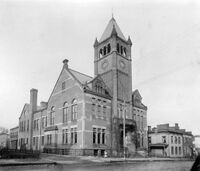 Wooster City Hall (1887) - Built in 1887 and razed in 1962 Wooster's old City Hall was one of a kind. Jail cells were in the basement and a few city offices at the front on the main floor, along with an auditorium and stage, many remember as the City Opera House. On the second floor was a balcony and city council rooms. At the rear of the big brick building was the city's fire station.

Practically every event that went on at the old City Hall drew a crowd, whether it was a concert, a play, a speech, or a City Council meeting. The stage on the main floor of the building provided a place for entertainment that featured both local talent and many famous people of their time, including William Jennings Bryant and John Philip Sousa.[1]

The old Wooster City Hall was a real community center in its day. More details