The Wooster Township School No. 1, Taggart’s School, was built in 1874 on what is now Canal Road. Previously known as the White School, its red brick structure and bell tower were larger than many of the other township schools. The land of the school was owned by Catherine and James Taggart until they sold it to the members of the school district in 1878 for $250.

The Wayne County History Book Committee describes the school as having “one large room [which] had a sixteen-foot-high curved ceiling, a door in the front and back, large window on two sides, two cloakrooms, and a long stage with a big storage room in back of it. Outside there was a deep well with an iron pump, two lavatories, and a fenced yard with [a] shade tree.”[1]

Because the neighborhood was said to have been heavily populated one can only assume that there was a very high attendance from children within the community. Additionally, due to the high attendance rate, the class reunions for the Taggart school were said to have been record breaking, with an attendance of 100 students in 1989. After the closing of the school in 1939, the building was sold for $1,010 and changed ownership three more times. In 1974 The Daily Record interviewed the new family living in the old school house, the Steinbrenners. [2]The schoolhouse had then been transformed into an actual house. Although, the external structure of the building had not been changed there were many new features within the house, like the addition of antique furniture that added character and charm to the old school building and the addition of a room for the younger Steinbrenner daughters; their older children were said to have shared a loft overlooking the school room.[3] 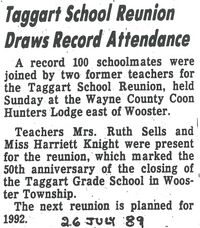 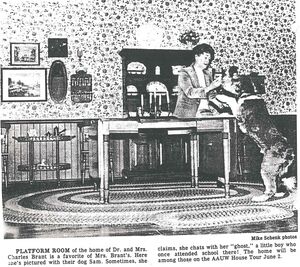