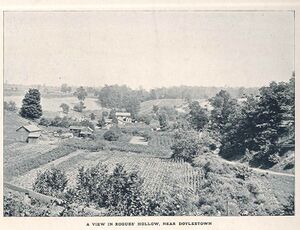 Rogues Hollow was known as one of the nation's toughest spot. The wildest period of the Hollow was in the 1860s and 1870s. By 1957, it was known as place to take a beautiful drive.

Rogues Hollow is located about one mile south of Doylestown. It is believed to have been given its name because of the reputation of the people who once resided in this coal mining town. In the 1840s, it was commonly known as Peacock Village and Peacock Hollow. A little later it became known as Rogues' Hollow.

Rogues Hollow is located about 1 mile south of Doylestown. It was known for coal mining. During its peak in the 1860s and 1870s, it was a very lively place. This picture found on page 66 of Picturesque Wayne shows the beauty around the area.

Fall is the time of year when tales of ghosts and strange happenings become common place. Rogues Hollow is no different. The book, Rogues Hollow: History and Legends, details some of these stories. Stories include a haunted house, the devil riding a headless horse, twin ghosts, dancing picks and shovels, shadowy men working in coal mines and the old man with a beard in the haunted mill at Rogues' Hollow.

The Rogues' Hollow Festival is an annual event which takes place the first Friday and Saturday of August. (If the 1st falls on Saturday, it will take place the following weekend ) A parade is held on Friday night with Fireworks on Saturday night. Live entertainment happens throughout the Festival.