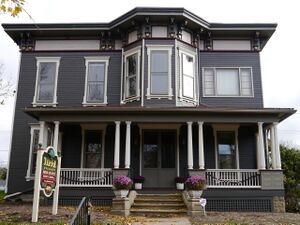 The history of the property dates back to 1813 when a land patent of 40-acres was given to Joseph H. Larwill by President James Madison. The land was divided and 10 of those acres were purchased by John Sloane in 1820. In 1850, Judge Charles C. Parsons purchased the property and sometime during the 1860s he built a massive Italianate styled home. The Parsons family retained ownership of the property until 1893.

It was in 1908 that Martha A. Welch, wife of Dr. William Welch, purchased the property and it was their daughter, Abigail, who later received title of the property after her marriage in 1940 to J. Robert McConnell, a funeral director operating next door. After their marriage Robert and Abigail (Welch) McConnell moved the funeral business into the house. Abigail's father, Dr. Welch had since died and Mrs. Welch remained a resident of the house until her death in 1942.

The McConnell funeral home business terminated in 1978 at the time of Robert McConnell's death as his wife Abigail had preceded him in death in 1968. The McConnell's left no direct heirs so the house, its contents and property were handled by an executor and a public auction in May of 1979 scattered their belongings near and far.

The house has since been used by various businesses for office space over the years.[1] 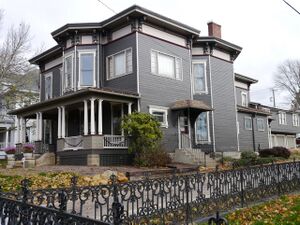 Side view of the house located at 449 N. Market St. in Wooster, Ohio that shows its massive size.