Many traditions we celebrate today have been the result of our immigrant ancestors. Such is the case with August Imgard, a German immigrant who introduced the first Christmas tree in Wooster, Ohio.

August Imgard was born in Wetzlar, Prussia on 8 January 1828. He departed from the port of Le Havre, France on the ship Zurich. He arrived in the port of New York, New York on 15 September 1848, at the age of 20 years. Upon arriving in the United States, he traveled to Wooster, Wayne County, Ohio where he settled and remained until his death on 7 October 1904.

August Imgard built a house now located at 527 Beall Ave in Wooster, OH sometime between 1867 and 1873. This house was originally located on the southeast corner of Beall Ave and Bowman Ave and was moved in 1913 to its current location [2]. It is now the parsonage of St. Mary’s Catholic Church. In his obituary found in the Dalton Gazette on 13 October 1904 on page 4, Imgard’s home was described as “one of the most elegant homes in Wooster”. The obituary continued to state, Imgard “took great pride in his home and the beautiful grounds of his homestead”.

Imgard was a tailor by trade. On his arrival in Wooster, he set up a small tailoring business in Wooster. The tailor shop was located on Wooster’s Public Square, the main business hub of Wooster during the 19th and early to mid-20th centuries. Imgard was considered a “very industrious man and very successful in his business” [3].

The story is told that as Christmas neared, Imgard became homesick. He decided to bring one of his homeland traditions to his new home. He crossed the Little Apple Creek and cut down a small blue spruce tree. As he carried the tree across the creek and to his new home, many of the locals gazed at the unusual spectacle, perplexed by what they saw. Imgard had a local tin smith make him a star for the top of the tree. Imgard decorated the tree with candies, paper ornaments, apples, candles, nuts and popcorn for family and friends to enjoy [4]. The tradition caught on and spread through the area. To honor this tradition, a blue spruce tree can be found next to his final resting place at the Wooster Cemetery.

Names were often spelled phoenitically. Other times, the handwriting from historical documents is difficult to read. This section should include variations in the spellings of the last name (surname) and the first name (given name). Any nicknames use by individuals should be noted. 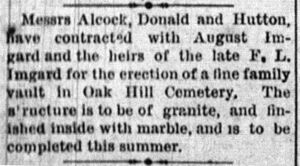 Include citations for Federal, State, and Local censuses. Abstracts may be included. 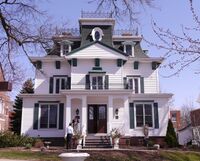 List any occupations held by the individual throughout his life. Career highlights may be included in this section.