Spelling Variation in the Given Name

The wife of Hon. L. R. Critchfield departed this life October 6, 1895. As of all beautiful women, the elegance of her personality is indescribable—a composite glow of vital forces. The funeral services took place on October 8th, at the family residence on North Market street, Wooster. She died as a martyr. Possessed of remarkable courage, seeing the home on fire, and attempting to extinguish it, she received her fatal injuries.

Mrs. Critchfield was a daughter of Dr. Moses Shaffer, and his wife, Margaret McClure, daughter of Matthew McClure, Sr. She was born in Wooster, May 12, 1834, making her age at her death, sixty-one years, four months and twenty-four days. On October 2, 1854, she married Hon. L. R. Critchfield by which union were the following sons and daughters: Edith, Grace, Mary, Blanche, Henry, Nellie and Lyman R., Jr.

The character of the deceased was, in many respects, a public one. She was born and reared in the city of Wooster and was intimately associated with the old families whose descendants constituted the society of the city. Her vivacity, her beauty and genial disposition, and the high standing of her family, made for her a ready welcome. Her grandfather, Jacob Shaffer, was a soldier of the war of 1812; her uncle, Hiram Shaffer, was an eloquent Methodist preacher; her father, Dr. Moses Shaffer, practiced medicine in Wooster for fifty years. His oldest daughter, Adelaide, became his companion in his professional visits and her acquaintance became general in every section of the county. Her brother, Dr. Hiram M. Shaffer, was celebrated for his genius and skill as a physician and surgeon. Her brothers, Hiram, James and Horace, were soldiers in the Civil War. Her mother, Margaret McClure, was one of a large and noble family of the early settlers; her grandparents, the McClures, were a saintly couple of high and spotless character. The deceased had all the splendid virtues and splendid courage of her family so widely known, and she enjoyed in an eminent degree the popularity of the family descent and standing. She knew many of the distinguished men in public life, and was familiar with public thought and public matters. She was a practical woman of great attractions in manners and geniality: well educated and thoughtful, she had a fine faculty of sociability in a public way; she was winning with her smiles and genuine womanly greetings; she loved and attended public meetings, religious, literary, musical, dramatic and political. With a number of the leading ladies of Wooster, she attended a school of parliamentary teaching and became a parliamentarian. She was not a woman of no politics, but had views on the rights of women, and of the people; she had inherited anti-slavery principles; she was wholly on the side of temperance and temperance organizations; she had more than ordinary public spirit. In the University of Wooster, in the State Agricultural Experiment Station, in the Baltimore & Ohio railroad, in the acquisition of manufactures, in the beautifying of the city, she manifested the greatest pleasure.

In person she was esteemed as the most beautiful of women. Being five feet seven inches in height, and her development large and symmetrical of beautiful face, dark, hazel eyes and dark hair: swift and agile in motion, tasteful in dress. Look at her picture and see that admirable expression, that symmetry of head and neck and shoulders. She speaks her words of love with carmine lips; the bust significant of a form of beauty, graceful, open faced, beaming and reflective. They bespeak for her the admiration spontaneously given to superior personality; the splendid evidences of the American woman.

Some special virtues of her life assumed peculiar prominence. A more than ordinary education illumined the life and family of this exceptional woman; she was a counselor, comforter and inspirer. Her earlier years were taught in the Wooster schools of Mrs. Pope and Miss Kate Rex (Mrs. McSweeney). She attended the female college at Granville, Ohio and the female college at Delaware, Ohio. Accompanying the Wooster schools were institutions that taught and developed the graces of motion and manners which she with other young ladies of Wooster, attended. During all her life her step was light and her motions graceful and polished. In her domestic life this grace and polish adorned her. Her soft footstep going and coming in daily duties, the rustle of her dress, the gentle voice of household government, her noiseless coming through the rooms, her swift touch, and graceful poise, and agile motion, and elastic manners, were the perfection of versatility, and in the days of trailing skirts, when in full dress, gave her a queenly stateliness equaled by few; and this fine taste and educated gracefulness distinguished her family; and her personal labors in clothing her children had the touch of rare and finished skillfulness. Her peculiar habit of associating with the aged adorned her with a mild and gentle temperament; the old mothers of Millersburg and Wooster loved her. Her tender vigils at the bed of the sick; her beautiful composure and skill; the enthralling advances of her greeting; the electricity of her touch, seem now a lovely presence.

She was a Christian. The family books marked by her in her moments of leisure were not the classical curiosities of mythology, but the story of a real Redeemer, and in this great trust she taught her household. She was a habitual reader of the Divine Word. From early life she attended the services of the church; she was a lover of music and sang with great sweetness, and as her children grew, they were trained by her in the same religious impressions. Her religion was more than sectarian life; her education fitted her for larger associations: of the beauties of her life, none were more lovely than the generosity of her religious sentiments; she freely mingled with Christians of all denominations; she exemplified the character of her Savior in all the duties of life. In the album of her daughter Addie she wrote the story of her life:

“May 12, 1884. “Dear Addie: “A good name is rather to be chosen than great riches, and loving favor rather than silver and gold. “Your affectionate “MOTHER.”

Her hand was steady; her writing small, exact and uniform, the characteristics of the refinement and polish of controlling nerve, and the beauty of her correspondence is but another phase of that same exceptional skill manifested in family nurture.

This noble woman lived like a heroine and died like a martyr. Twenty-four grandchildren and one great-grandchild and the future innumerable descendants, will revere her memory.

Include citations for Federal, State, and Local censuses. Abstracts may be included.

List any occupations held by the individual throughout his life. 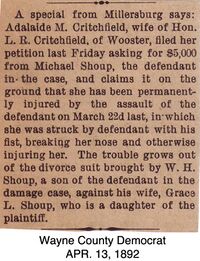