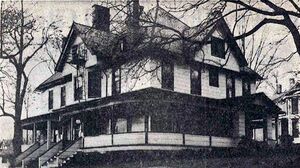 Image of the grand house once located at 806 College Ave. in Wooster, Ohio that was a Barber architectural designed house.

The house once located at 806 College Avenue in Wooster, Ohio, on the northwest corner of College and Pearl street, was built in 1899 by local contractor Samuel Ames for the Dr. Rev. Oscar A. Hills and family. The architect was George F. Barber best known for his residential designs, which he marketed worldwide through a series of mail-order catalogs. By the late 1890s and early 1900s, Barber designed some of his most elaborate mansions for affluent people. However, a later 1962 newspaper article stated that Dr. Hills drew the rough plans for the house himself and was very proud of his handiwork. The house at 806 College Ave. was described by a Wooster Republican reporter as a "mansion" and gave a detailed account of his tour of the home:

It had a tile-laid vestibule of hard wood, all lumber supplied by D.C. Curry & Co. The reception hall at the north and double parlors on the south were connected by sliding doors; the finish and floors were all of hard wood; the grand stairway, with its double landings, were the most pleasing feature of the lower floor. The dining room was finished in oak, with a wainscotting of the same material. Leading off from the dining room was a butler's pantry, noted as a wonderful combination of conveniences; the kitchen, like the pantry, was most complete and just off the kitchen was a "cooling room," so constructed that ice could be put in from the outside of the house. On the south side of the house was a large and beautifully situated sitting-room, besides a parlor and bathroom for servants. Surrounding the house was 200 feet of porches, the view from the south being a grand one. On the north was a covered drive that had an entrance and hallway that led to the grand stairway.

The sleeping rooms on the second floor were finished either in oak or southern pine; about all have beautiful fireplaces and mantles. On hte south side and commanding another wonderful view of the landscape, was the study of Dr. Rev. Hills that had shelving on all sides of the room but the south that extended from floor to ceiling. The room included a cozy alcove in the west-side corner. Also on the second floor was a bathroom and numerous closets.

The third floor of the house was finely finished with several fine rooms and a room lined throughout with cedar, for storing clothing. A large tank for storing rain water was situated in the attic and was pumped from the cellar to the tank by water motor.

Other contractors employed in the construction of this house were: J. C. Tieche for plumbing, beating and roofing; John Winters for plastering; Samuel Metzler for painting; C. E. Frailey for electrical work; and E. S. Cooper for paper hanging (wall paper).

After the death of Dr. Oscar A. Hills in 1919, Mrs. Hills continued to live in the house until her death in 1927. The next year Dr. Gertrude (Coffin) Crandell, a widow, acquired the property and house and opened The Hill Sanitarium in July of 1928 to begin her practice as an osteopathic physician and to educate her family of five children. Three of the five children became graduates from the College of Wooster. 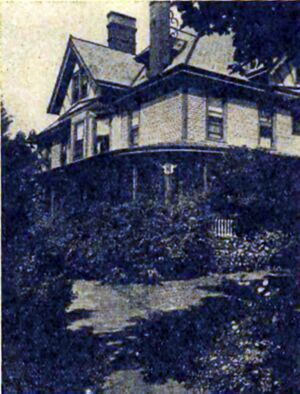 Image of the house as it appeared as Hills Sanitarium

Dr. Crandell ran a rest home and sanitaruim in this house until 1942 and served as the resident physician in this institution. The Sanitarium served the community in many ways. it provided most of the facilities of a hospital except for major surgery, mental treatment, and contagious diseases, every other type of illness was accepted. One of her most prized possessions was a ledger book which listed the official birth records of more than 80 babies born in the house. Dr. Crandell closed the sanitarium in 1942 and converted it into apartments, rented to college students and couples. She maintained her osteopathic practice until 1958 and finally retired at the age 85. After retiring she turned the house over to the College of Wooster to be used as dormitory and it became known as the Crandell House.[1] In later years, 1990s-2000s the College allowed a fraternity to live-in and operate out of the Crandell House which led to its ultimate demise.

The house was destroyed by the College of Wooster leaving an empty lot at the northwest corner of College Ave. and Pearl St.

Note: This house's one time business name, The Hill Sanitarium, might have sparked the long-running rumor that there once was an insane asylum in the area of College Hills shopping center, as over time it's location on College avenue and Hill's Sanitarium got munged together to become College Hills Sanitorium. To be clear there never was any such insane asylum facility in Wooster, but does explain how the rumor might have began.