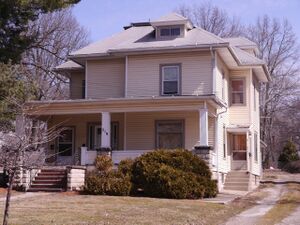 The house located at 519 N. Bever St. was likely built by property owners Aaron and Julia Lehman sometime between 1865-1868. Photograph by S. Zimmerman

The large wood frame house located at 519 N. Bever St. was likely built by property owners Aaron and Julia Lehman sometime between 1865 to 1868 as a local newspaper article reported that Aaron Lehman built a one-and-a-half-story frame dwelling with wing for a reported cost of $2,000. However, the couple did not live in the house very long as they sold it to a relative, attorney Henry Lehman, in 1869. Henry Lehman, lived in the house until about 1873 when he moved to Philadelphia, Pennsylvania and from there, in 1887 to Atlantic City, New Jersey. Henry Lehman sold the house in 1875 to Sarah A. McCoy.

The house has obviously been through a number of renovations and additions over the years so that it no longer retains any of its post Civil War architectural features. It now stands two-stories tall with a hipped roof and several dormers protrude out of the attic level. The front porch dominates the facade with an ashlar base and square wood column supports.