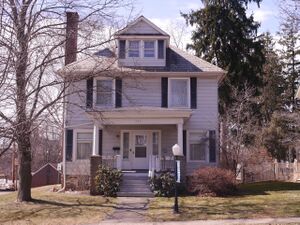 The wood frame house located at 332 N. Bever St. in Wooster, Ohio was likely built sometime between 1908-1910 for property owners Walter G. Whitaker and his wife Katherine P. Whitaker as they bought the lot of land for $1,200 in 1908 and sold it in 1910 for $5,500 indicating a substantial improvement was made to the property: a house was built.