This document is a program of the 30th Anniversary Reunion of the Eighth Ohio Volunteer Infantry. It is found in the Frank Gerlach file. 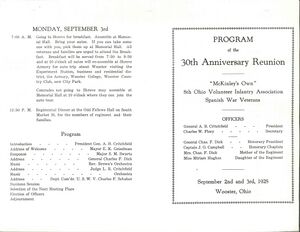 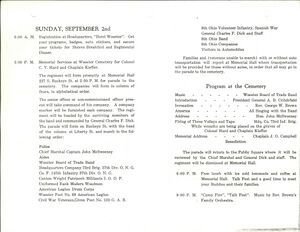 PROGRAM
of the
30th Anniversary Reunion

9:00 A.M. Registration at Headquarter, “Hotel Wooster.” Get your programs, badges, auto stickers, and secure your

The regiment will form promptly at Memorial Hall 227 S. Buckeye St. at 2:30 P.M. for parade to the
cemetery. The companies will form in column of fours, in alphabetical order.

The senior officer or non-commissioned officer present will take command of his company. A company
marker will be furnished each company. The regiment will be headed by the surviving members of the band
and commanded by General Charles F. Dick. The parade will form on Buckeye St. with the head of the
column at Liberty St. and march in the following order:

Program at the Cemetery

The parade will return to the Public Square where it will be reviewed by the Chief Marshal and General Dick and staff. The regiment will be dismissed at Memorial Hall.

6:00 P.M. Free lunch with ice cold lemonade and coffee at

Memorial Hall. Talk Fest and a good time to meet
your Buddies and their families.