This document is a newspaper clipping detailing the proceedings of the commission which determined the placement of battle monuments to soldiers from Ohio who served during World War I. It is dated February 4th, 1927, and is found in the Frank Gerlach file. 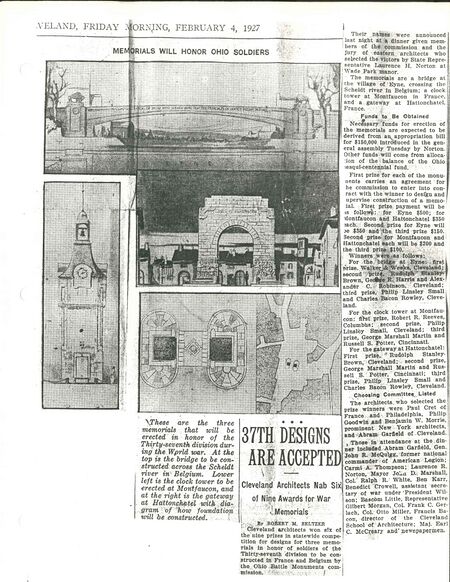 These are the three memorials that will be erected in honor of the Thirty-seventh division during the World War. At the top is the bridge to be constructed across the Scheldt river in Belgium. Lower left is the clock tower to be erected at Montfaucon, and at the right is the gateway at Hattonchatel with diagram of how foundation will be constructed.

Cleveland architects won six of the nine prizes in statewide competition for designs for three memorials in honor of soldiers of the Thirty-seventh division to be constructed in France and Belgium by the Ohio Battle Monuments commission.
Their names were announced last night at a dinner given members of the commission and the jury of eastern architects who selected the victors by State Representative Laurence H. Norton at Wade Park manor.
The memorials are a bridge at the village of Eyne, crossing the Scheldt river in Belgium; a clock tower at Montfaucon in France, and a gateway at Hattonchatel, France.

Funds to Be Obtained