This document is a newspaper clipping which details the involvement of several high-ranking members of the Eighth Ohio Volunteer Infantry (O.V.I.) in ceremonies associated with the rediscovery of the 8th O.V.I.'s colors. The clipping is hand-dated 1-29-26, and is found in the Frank Gerlach file. 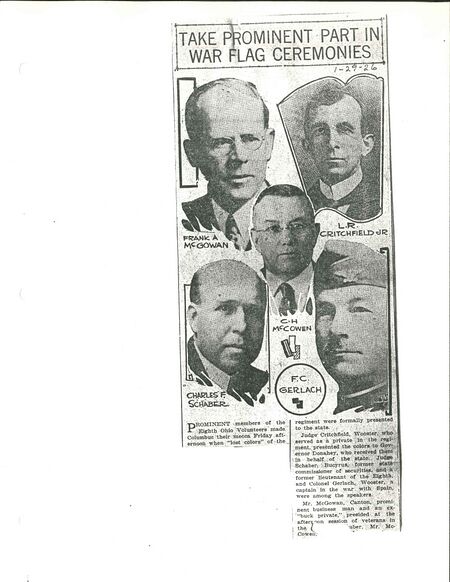 PROMINENT members of the Eighth Ohio Volunteers made Columbus their mecca Friday afternoon when “lost colors” of the regiment were formerly presented to the state.
Judge Critchfield, Wooster, who served as a private in the regiment, presented the colors to Governor Donahey, who received them in behalf of the state. Judge Schaber, Bucyrus, former state commissioner of securities, and a former lieutenant of the Eighth, and Colonel Gerlach, Wooster, a captain in the war with Spain, were among the speakers.
Mr. McGowan, Canton, prominent business man and an ex- “buck private,” presided at an afternoon session of veterans in the [illegible] -mber. Mr. McCowen, [illegible].